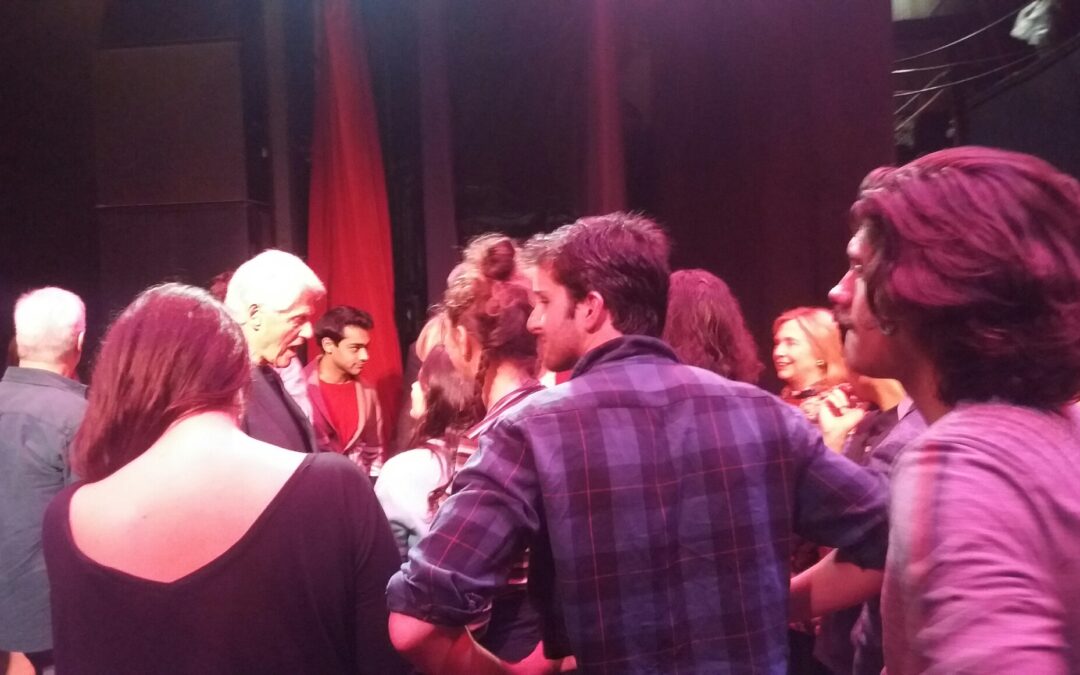 This month, in addition to classes, I worked as crew for the school musical. The Neighborhood Playhouse runs a two year programme (the second year being by invitation) and, by tradition, the 1st year students are crew for the 2nd year student’s performances – a musical, a show case and in a few months – final plays.

The 2nd year Musical was called ‘Jury Duty’ and fulfilled it’s purpose of showing the best of each actor’s singing ability. I was impressed by how cleverly the whole show was stitched together – to be a functioning plot-driven musical, rather than just a revue of songs.

I operated the lighting desk – something I have done in the past in NZ – although with a different system. The different lighting states and scenes are are all programmed by the lighting designer so it’s basically a case of hitting a space bar to move to the next cue.

The skill is hitting the space bar at the right time.

In the show the homicide which the jury is hearing is depicted in flashback. The death at the crime scene is shown and a blackout returns the audience to the courtroom scene.

In this rehearsal I ended the blackout too early – the lights coming up to full just in time for everyone to see the fatally wounded body climb to his feet and walk off stage. Funnier than embarrassing – I was pleased it was in rehearsal!

The suprise of Opening Night was to see US President Bill Clinton and Hilary Clinton in the audience! They had come to see their nephew perform. I stepped thru the foyer a few minutes before curtain and bumpted into Bill Clinton coming through the front door. It took me a moment to realise who he was – and before I had he had put out his hand and shaken mine. He looked distinguished so I blurted out “A privilege to meet you, sir” which, when I joined the dots a few moments later, I decided was fortunate.

After the show had finished and the audience exited into the foyer Bill and Hilary met the cast onstage. I was pleased to be part of the crowd and watch and listen in on the conversation from a little further back (picture below).

When the time came to leave, he again made a point of shaking hands with everyone. He came to me and again put out his hand, and so for the second time that night, I shook hands with a US President.

It was all quite surreal. I was pleased to be wearing a tie.